So this is mostly just for the sake of documentation.  I guess it might be of interest to a few people.  Anyway, Jane got her first haircut last week.  She had this weird “wing” thing going on where her hair was longer on the sides and shorter in the back. 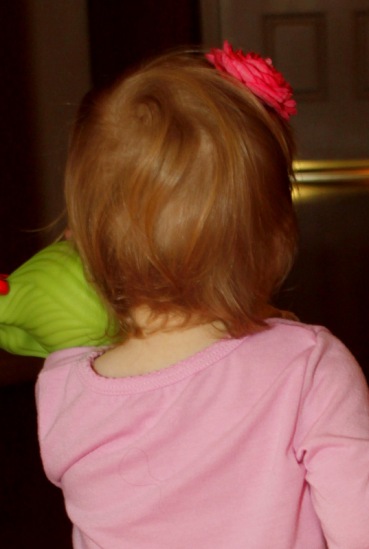 So…I decided to just even it out.  I think it turned out pretty darn cute.  I wish I would have thought to take some “before” pictures.  Oh well.  Here are the “afters”.

This wasn’t actually her first haircut.  When she was born, she had a “tail” of hair right in the middle of the back of her head, and I cut it off!  I wonder if I would have left it, if the sides and middle would have been even at this point instead of the “wings?”  Probably the back was just getting rubbed shorter since she sleeps on her back.  Well, whatever the case may be, her new cut is perfect and she couldn’t get any cuter no matter what.